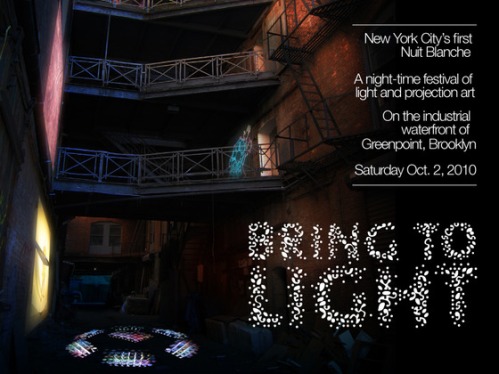 Last night in the Greenpoint area of Brooklyn, the first ever Nuit Blanche “White Night” was held in New York City. This festival of lights, which has been held in areas around the world such as Atlanta, GA and Paris, France, allows artists and designers to display their light creations on sides of buildings, in warehouses, and throughout sidewalks, playgrounds, and street corners.  The festival combined artistic expression with technological outputs and showed the potential creativity that could be reached with the blending of the two.

The most interesting (and relevant to our class) option they had at the event was a participatory project.  Visitors to the celebration could download an application, similar to most museum styles we see today, and create their own designs that would then be projected onto the buildings.  It was a great way to allow the visitor to feel creative, important, and instrumental in the success of Nuit Blanche.  The picture below shows the steps required for participation.  It was a great event, and an even better way to get people involved in both art and the community!

Posted on October 4, 2010 by Michelle Jackson | Leave a comment 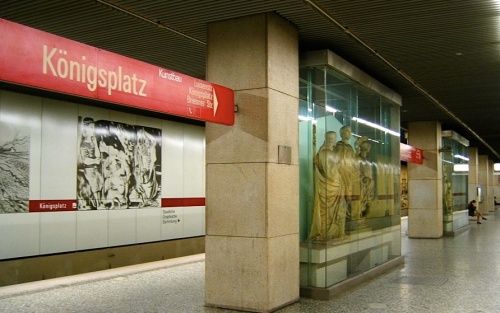 An interesting aspect of the changing face of the museum is the re-purposing of spaces outside of the museum to increase visitor interest. In particular, I’m thinking of a really unique permanent installation in one of Munich’s subway stations on the U2 line. The Königsplatz station is located in the Kunstareal (museum quarter) of the city and situated directly in the vicinity of two of the world’s most important antiquity collections, the Glyptothek and Antikensammlung. The installation within the station includes large-scale glass vitrines which display selected Greek and Roman sculptures in the round, all chosen from the two museums’ collections. These displays serve as a sort of tantalizing appetizer to the incredible museums which lie directly above ground.

I had the privilege of walking through and using this station every day for a year while attending university classes. At the time, my reaction was somewhat nonchalant. (Munich is famous for its innovative and dazzling subway station designs. For example, the newly renovated Münchener Freiheit station which incorporates displays of contemporary art work into its walls.) But in comparison to many a dingy and dilapidated subway station in Philly and New York, the uniqueness of Königsplatz is really something noticeable. It is at once an advertisement for the Kunstareal museums, an entertainment piece for commuters, and an integral part of the fabric of the station’s architecture.

In the same vein, this subway station also hosts the Kunstbau, which is an art gallery suspended underground and above the subway station itself. Train riders can see into the gallery as they descend the escalators to the platform, providing another sort of “real time” advertisement for the gallery’s current exhibition. Associated with the Lenbachhaus Gallery, it was designed by Uwe Kiessler, built in 1994, and is also equipped with auditorium facilities for films and presentations. A huge 2009 exhibition of Wassily Kandinsky’s work was especially successful for the gallery, and often the clear glass windows revealed an absolutely packed gallery floor to the subway passers by.

These clever incorporations of museum collections into the everyday world can make even the numbing mundanity of a subway ride both a learning and cultural experience. Not to mention, they are quite successful ways to pique a prospective visitor’s interest. For more on the Kunstbau.

Posted on September 24, 2010 by Michelle Jackson | Leave a comment

Apropos our discussion on Monday which briefly touched on the concept of Museum 2.0, a very relevant reinvention of the museum is currently taking place along Philadelphia’s Benjamin Franklin Parkway.  Museum Without Walls: AUDIO is essentially a downloadable personalized audio tour of public sculpture available as an app for your iPhone or as a podcast for your computer.  Implemented by the Fairmount Park Art Association, the tours encompass the 50+ sculptures peppered amidst the myriad cultural institutions of the Parkway, and are based on the idea of authenticity in the presentation and interpretation of sculpture.  These tours seek to purvey the different perspectives of artists, historians, teachers, scientists, writers,  local community leaders, and, yes, curators in order to present a more personal experience of Philadelphia’s rich tradition of public sculpture.

This idea is definitely interesting for its engaging use of public space, and its aim to reacquaint Philadelphia with some recognizable but perhaps still mysterious works of sculpture.  Also of interest is the added role of the spectator as an active participant in the “exhibit”: visitors are invited to submit their photos and/or anecdotes to the program’s website.  Added bonus: tours are free! For more information, including an interactive map, please see: http://museumwithoutwallsaudio.org/

In 1942 when Fredrick Kiesler designed Peggy Guggenheim’s gallery “Art of this Century” he incorporated armatures into his design that literally presented the artwork to the viewer by removing the art from the wall and placing it into free space. This ‘active’ exhibition design broke the inherent two-dimensionality aspect of the artwork and placed in within a three dimensional space. As a result, the audience and the art were comfortably within the same environment. As a result of this design, Kiesler’s exhibition was critically acclaimed and in the last few years there has been a Kiesler-revival. I am interested in the fact that today Kiesler’s work  not only remains provocative but is also increasingly relevant. Kiesler recognized not only the role of the surrealist art in his design but he recognized another important ingredient in his design – the viewer. His training as a set designer had prepared him for this role – he created sets but more importantly he created spaces for the actors within his sets. In our discussion in class we speak so often of the curatorial narrative, of the display of information, of the experience of the exhibition, of the expectations of the audience, but in reviewing Kiesler’s exhibition, it seems that we don’t actually think about the physicality of the exhibition and the viewer. We do indeed talk about how the viewer fits into the exhibition – culturally, academically, etc – but physically fits? Sometime the most important move is the simplest move – welcoming the viewer so they can exist in the same of the exhibition… the display, path, experience, etc then become relevant.

The Latest Word: Spaces of Experience

The latest word in display theory was just released by Yale University Press. As in two weeks ago. Charlotte Klonk’s Spaces of Experience: Art Gallery Interiors from 1800 to 2000 locates the development of art gallery interiors in the broader history of experience and perception. It looks like an interesting read, and may be helpful in guessing what comes next!

Technology and the Human Hand

It seems that as this class looks into the museum of the future, we get more and more skeptical of the human aspect- will the human have a place in the museum, and if so, where will it be?  As Stephen and I were researching the future of the science museum he came across this interesting video that emphasizes the importance of human/technology relationships. In the future, museums, especially STEM museums- those that specialize in Science, Technology, Engineering, and Mathematics will rely on the human presence to explain important concepts to the viewers.  These museums will not only be areas of learning, but real forums to solve global problems.

The video is very inspiring, I think it gives a good idea of how the human, instead of disappearing behind the technology’s presence, will become an even more valuable asset to the museum structure.

Jake Barton, “Collaborative Storytelling and the Dissolution of Technology”

Last night I attended the School of Visual Arts Design Criticism lecture series featuring Jake Barton, the founder of Local Projects. The lecture was on “Collaborative Storytelling and the Dissolution of Technology” and focus largely on the Local Projects process of storytelling and use of technology through their project.

A common theme throughout his lecture was the humanness that connects people, thus the question of how to engage people in a museum. A recent study that he addressed concluded that the average person spend eight and a half hours looking at screens, therefore his studio has the difficult task of keeping peoples attention to more screen (which they commonly use in their designs). Some of the ways in which Local Projects addresses these issues is using seamlessness in their design, humanness to connect people, and simplicity in the technology. Barton states that they did not want the technology they used to be overly complicated, because they are not focusing their designs on a tech-savvy group, it must be generally accessible.

I found this issue of the use of technology in the museum space very interesting and the discussion after the lecture brought up many questions about its present and future placement within our society that I found relevant to the class. There will be many technology advancements within the future, which will directly affect the museum, but I think that in many ways the function of technology in museums will stay very similar to today use of them. I thought that Barton’s idea that technology should be seamlessly woven into the museum so that one forgets about it even being there very important. People do not want technology thrown in their faces, technology should be used to enhance the experience not distract from it.  In addition, the technology should be simplicity in its nature, this way it can be accessed by a wide ranged audience without difficulty. Finally, museums are about human experiences and learning and the technology should reflect that in its design and function. An example of that humanness is in Local Projects’ exhibition in China with the theme of caring. There are screens with people discussing their views and ideas about what it means to care, but the people are full sized looking the viewer straight in the eye as if the viewer was talking to a real person.

Technology is consistently around us and has the potential to engage the museum visitor in new ways. Yet, the goal should promote human interaction and discussion about the topics it raised in the museum space. I think that the idea that technology needs to be seamlessly integrated into the museum (so that the visitor forgets about it) and uncomplicated would greatly benefit museums in the future. In addition, that the first goal of the museums in its use of technology should be to create better human interaction and discussion in the museum space, not to isolate people even more. Technology has great potential in the museum if it is used correctly and effectively.